What the Future Holds for Drones in Security

Drones have the potential to open a world of possibilities for risk management agencies involved with executive and corporate security. For instance, they can be used to conduct large-area ongoing surveillance of facilities to help protect people and facility assets.

Should there appear to be a security breach, drones could be sent out to investigate the situation first, providing a safe, reliable initial assessment of what is occurring. Based on this assessment, you and your staff can determine next steps, whether that means personally investigating the situation further or deciding that local authorities should be called in. 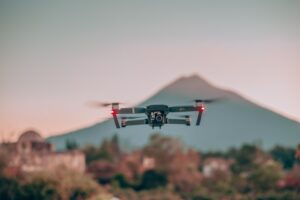 However, here’s our challenge. While drones offer many possibilities, the law is still not there yet. Right now, we find drones are being used more extensively in other parts of the world to help minimize risks. The Federal Aviation Association (FAA), which licenses pilots to fly drones, as well as the Department of Justice and FBI, which regulate drone use in the U.S., are currently taking their time deciding how drones can and cannot be used in this country.

One reason for this is that there have been several “bad actors” putting drones to use for unsavory purposes over the years. This has hampered the entire drone industry in the U.S. and slowed the adoption and growth of this technology in corporate security.

With that said, we still have high expectations for drone technology in the future and believe it will play a significant role in risk management and corporate security. Because of this, we would like to share some key facts about this technology, so you know more about drones and their use when the time comes.

As noted already, sea breezes prevented nearly all the drones launched in the 1849 assault on Venice from reaching their destination. Wind is still a problem today. Complicating matters, wind speed on the ground may not be the same as what the drone experiences once aloft. Further, weather conditions, in general, can have a significant influence on whether a drone can and should be used.

Since 2020 was such a tumultuous year, it’s possible that Congress and the government agencies mentioned earlier will ease some of their restrictions on the use of drones. This would allow risk management agencies such as TAL Global to take advantage of their full potential, helping us minimize risk and provide even more security options for our clients in the future.