What’s Happening with the Proud Boys and Oath Keepers?

We have not heard much about the Proud Boys and the Oath Keepers in the past few months. Both groups, as we remember, were directly involved in the January 6 insurrection.

At the time, they appeared well-armed, carried military equipment, and wore military uniforms. Both groups appeared very well organized and enthusiastic about their participation in the day’s event.

However, since then, some unflattering news about both groups has come to light; for example, how they have been spending their members’ money.

A Closer Look at the Oath Keepers

According to a recent report in the Wall Street Journal, Stewart Rhodes, head of the Oath Keepers, used a substantial amount of his organization’s money for a deposit on a house in Montana. Most of this money came from U.S. veterans and former law-enforcement officers supporting the organization.

The Journal was also able to review Rhodes’ bank records. Uncovered were thousands of dollars of Oath Keepers money going for goods and services used for his own purposes. These included the following: 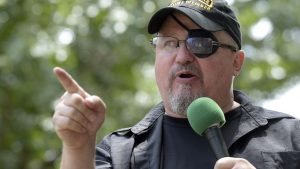 Plus, a nationwide fitness chain founder gave Rhodes a $10,000 donation for the Oath Keepers. That amount was never reported on the organization’s books, and to this day, no one is quite sure where that money is or how it was spent.

“He used [the Oath Keepers’ funds] as a piggy bank,” said Ed Wilson, an Army veteran who managed information technology for the Oath Keepers in 2015. Wilson said he alerted the organization’s board about the mishandling of the money and quit after the board refused to act.

However, for the Oath Keepers and the Proud Boys, the mishandling of money may be the least of their concerns. Instead, both organizations are running out of money — fast.

“We’re bleeding,” said Enrique Tarrio, who operates an e-commerce business to support himself and other Proud Boys members. “We’ve been bleeding money since January, like hemorrhaging money.”

One of the reasons for this is that many of the members of these two groups have moved on, taking their money with them. Either they have abandoned what these groups stood for, do not want to be involved with them for legal reasons, or have joined other, more extreme groups that have cropped up since the uprising.

Other Reasons for the “Bleeding” at the Proud Boys and Oath Keepers include the following:

·         The departure of Donald Trump has left these groups without a figure head.

·         Both groups used e-commerce sites to generate cash. However, PayPal has cut off the Oath Keepers, claiming the organization promotes hate and violence. Since then, other credit- and debit-card processors now refuse to work with them.

·         Leading social media sites, one by one, have banned these groups, starting with Twitter and Facebook in 2020. More media sites have also cut the cord.

However, we are wondering if there may be something bigger going on here. While TAL Global does not take political stands on any issues, we can agree these groups have proven dangerous to our democracy. Could this “bleeding” be an indication that the beliefs and causes these organizations support is evaporating?

Both were formed during an extremely complicated time in our country’s history, made much worse by COVID and the economy’s collapse in 2020. It is just possible, as the pandemic passes and as the economy improves, the beliefs held by these organizations may no longer serve as great a purpose.

As always, we value your feedback, which helps us shape our perspective on recent events, security, and the services we offer. Click here to Talk to Us.