Many of you may be familiar with our TAL Global team member, Peter Franklin. His key role at TAL Global is to help clients assess vulnerabilities, counter both internal and external terrorism, and mitigate risks.  He is also an internationally recognized expert when it comes to risk management practices, minimizing the possibility of workplace violence, and crisis episode intervention.

What you may not know, however, is that he has been called as an expert witness in more than 250 legal cases involving premise and personal liability, security, and safety. Three of these cases are now viewed as landmark mass murder litigations.

But here’s something Peter Franklin keeps quiet about. He is also a philanthropist, focusing mainly on charity cycling events on the west coast.

This began in 1991 with the founding of the American Diabetes Association’s Tour de Cure®, a fundraising event to benefit the more than 34 million Americans living with diabetes. The funds collected go into research to find a cure for this disease and those impacted by diabetes. Peter has been actively involved with several of the Napa California Tours netting more than $1 million each.

Another cause he supports is the ALS Association. More commonly known as Lou 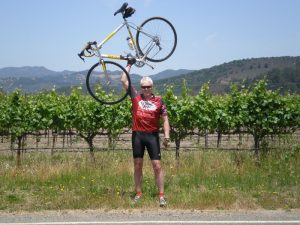 Gehrig’s disease, amyotrophic lateral sclerosis, a progressive neurodegenerative disease that slowly robs a person of the ability to walk, speak, and eventually, breathe.

His commitment to the ALS Association started in early 2004 when a close friend of his died after a long battle with ALS. In her memory, Peter co-founded what is now known today as the Napa Ride to Defeat ALS, often referred to simply as the “Ride.”

“Despite meager beginnings, the event has flourished over the years,” says Franklin. “We ultimately broke the $1 million mark at one event and to date, have grossed more than $9,000,000.”

The Golden West Chapter of the ALS Association devotes the entirety of the Ride proceeds to ALS research and patient care.

“I’m not going to deny the planning and preparation of the Ride is a formidable task,” adds Franklin. “But I do it to honor all those we have lost or are still suffering with ALS.   The challenge is well worth the effort, and I look forward to it every year as we get closer to a cure.”

Peter adds that his activities in support of the Ride have entailed everything from permit acquisition and regulatory compliance, logistics, route planning, and safety, to serving peanut butter and bananas to riders at rest stops.

But his philanthropy does not end there. Peter also actively supports – both physically, in bike riding fund raising events, and financially – other 501c-3 organizations. One he is committed to is Equine Rescue and Rehabilitation. This non-profit organization rescues neglected horses, finding them a home and providing veterinary care. He also donates his time and treasure to breast cancer research and women’s collegiate ice hockey.

“Peter brings a similar zeal and focus to his duties at TAL Global,” adds Johnathan Tal, CEO and founder of TAL Global. “Peter is our most senior team member. His five decades of risk management and security consulting are not only invaluable to our firm, but also to the hundreds of clients we have served over the years.”