Need to Read – Interview with a Ram Raider

Are you familiar with the term ram raider?  If not, you are not alone. Ram raider robberies have been far more prevalent in Europe and Australia than in North America.

Further, they seemed to have flourished mostly in the mid-1980s, forty years ago. However, many police departments today are concerned that with the resurgence of smash-and-grab robberies, ram raid robberies may be right around the corner.

Before we go any further, let’s get a better understanding of ram raids. They date back to the 1930s. Smash-and-grab attacks were also common during this period, but smash-and-grab robberies differ because they are conducted by groups of people on foot.

Ram raiders, on the other hand, use vehicles. (See video)

In fact, in many of the most extensive ram raids in Europe, three or four cars were used at one time. During these attacks, the thieves would drive all their cars straight into store windows or doors simultaneously.

This would allow for enough impact to break down doors and walls. Once inside the retail facility, ram raiders would run through the store, pulling merchandise off shelves, and placing it in the cars.

They rammed the building so they could raid it, thus the name, ram raider.

But it was not just retail stores that were subjected to ram raids. Many commercial buildings in the U.K. and Australia suffered from ram raids as well. Churches were not immune either. Ram raiders would plow into churches to collect art that could be sold on the illegal market.

As you can imagine, there was much structural damage to stores when a ram raid occurred. In some cases, retailers reported that repairing the structural damage was more costly than the total amount of items stolen.

In one study conducted in the U.K., researchers found ram raids reached their peak in 1992. After that, there was a slow decline each year.

Retailers and commercial facilities introduced barriers and other measures to protect themselves from ram raids, and police, by using surveillance cameras – even satellites – found they could catch ram raiders faster and far more frequently. The combination of tactics took away the lure of ram-raiding. 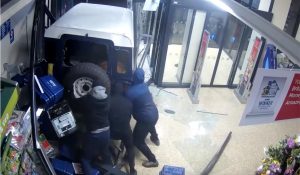 U.K. It involved seven men, with only one over the age of thirty. According to U.K. police, most ram raiders are in their early twenties, which is why they call it a “young man’s crime.” Police interviewed the seven men arrested. In the interview, one suspect talked for the entire group. The following are some of the questions the police asked and his answers.

Why did you conduct ram raids?

“We did it for the excitement. It’s also more lucrative than other forms of robberies, especially domestic robberies. Plus, it seemed like a good thing to do when we heard about others committing ram raids on TV and in the newspapers.”

Were you involved in smash and grab crimes before ram raids?

“Just one of us was involved in smash and grab, and mostly he robbed jewelry stores. He had a friend that suggested we start using cars to break into stores. Most of us had been involved in stealing cars before. So, using cars to rob stores came naturally.”

Were you “high” when you were ram raiding?

“Most of us were on something. It could be alcohol, speed, crack, or marijuana.”

Why did you conduct the ram raids?

“We did it for the money. In some cases, it was to purchase drugs. We sold the merchandise. We just wanted the money.”

How much planning did you do?

“Sometimes we planned ram raids months ahead of time. We drove around at night, looking for a suitable place. Sometimes we drive the cars slowly through doors to see how strong they are. We also had to plan the robberies so that there was not a lot of noise.”

It does not appear that getting caught was much of a concern. After the interviews with the spokesperson for the group and the individual members, the police concluded that the key motivating factors were money and excitement. I guess that’s another reason police call it a “young man’s crime.” It’s the thrill that’s captivating, not the consequences.

Johnathan Tal is Chief Executive Officer of TAL Global Corporation, an international investigative and security-consulting firm.  He served as a Military Field Intelligence Officer for the Israeli Armed Forces during the 1970s.  As an intelligence specialist, Tal supervised and initiated behind-enemy-lines intelligence gathering relying on both hardware systems and personnel.  Tal has also served as an anti-terrorism security specialist.  He is a licensed investigator, former President of World Association of Detectives (2000-2001) and holds a Bachelor of Science degree.  He can be reached through his company website at www.talglobal.com