Our Front Line Workers are Under Attack

As this is being written, the big news about COVID-19 is its resurgence in the U.S. However, what is getting far less attention today (and over the past 18 months) is how front line workers and the entire healthcare industry has come under assault since the pandemic began.

Here are just a few examples:

A doctor asked a family member for written permission to allow the hospital to ventilate the patient. The family member “verbally assaulted me,” said the doctor. The relative went on to say, “you doctors will stoop to anything for money.”

Permission was denied and the patient later died. When the family member returned asking for the body, the request was rejected based on guidance from the World Health Organization at that time. The family member then came back with 50 people and stormed the hospital, vandalizing the COVID ward, breaking glass recently placed to enforce social distancing, tossing paper files, and destroying computers.

Several months ago, nurse Monica Calazans, 54, proudly tweeted that she was the first person in the country to be vaccinated. Her goal was to encourage other Brazilians to follow her lead and get vaccinated. 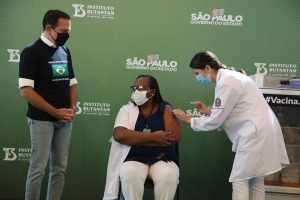 Instead, a smear campaign began, spreading fake news about her and the medical center where she works. “There were so many curses,” she said. “It was all on social media because they didn’t have the courage to say it to me, looking me in the eyes. [Before this] I’ve never had any trouble in a hospital where I work.”

In May 2021, when the Delta variant of COVID surged in India, family members were not allowed in hospitals. A nurse from the intensive care unit walked to meet with a family waiting outside the hospital’s gates. She told them they were running out of oxygen and asked if the family could get some. At the time, oxygen was being sold on the black market in India at exorbitant prices.

What the family members did next, however, was unexpected. “They panicked and stormed into the intensive care unit and began hitting the doctors,” said the nurse. “We were frightened because there is no security in the hospital. We told management, and the police came for a day or two, but no action was taken.”

Dr. Jovanna Torres, a medical professional in Mexico, was walking to her car wearing her customary medical uniform. Suddenly, another car pulled up and sprayed the health professional with bleach. It got in her eyes, but fortunately she was able to rinse them with water before it damaged her vision. All she could remember about the attack is that it came from someone in a car.

There’s some background to this incident. In many parts of Mexico, disinformation has proliferated, saying that doctors and nurses are spreading the disease.  “[But] we are there to help people,” says Torres. “Unfortunately, we are living in a crisis where there is a lot of fear, panic, and uncertainty, but this is a time when we need to come together.”

At about the time New York State was hard-hit by the pandemic, nurses at a Cortland, New York, hospital were finishing up their overnight shift caring for COVID patients. Most had been at work for up to 12 hours.

When they got to their cars, 22 nurses reported that their tires had been slashed in the hospital parking lot. A doctor at another hospital in upstate New York later told reporters that he and his staff are also facing violence, in one form or another, due to the pandemic.

“Patients have been hostile toward [hospital] workers at front desks, trashing lobbies, as well as coughing and spitting on health care workers. The hospital had to increase security,” said the doctor.  You can read more about this incident here.

Our big concern here is how this hospital, and many in the same situation, are increasing security. Simply adding more “uniforms” walking the halls and posted at entrances likely will not work. Instead, a comprehensive Health Facility Risk Assessment (HFRA) is needed. With an HFRA, an analysis will be conducted, identifying risks and vulnerabilities, and suggesting ways to address them, and help implement them, all to minimize risk.

These measures will help ensure the integrity of the facility, the safety of all those working and using the medical facility, and information technologies used by doctors, nurses, and administrators.

To Talk to Us, click here or on the link below.