And Yet Another School Shooting – This Time in Philadelphia 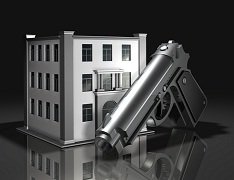 The facts are deeply worrying:

The details are nothing short of horrific.

Here are the details of the last two incidents:

January 18, 2014: A 17-year-old Raisheem Rochwell turned himself in Saturday, January 18, and was detained on charges stemming from a shooting that took place on Friday, January 17 in the gymnasium at Delaware Valley Charter High School in Philadelphia.

January 14, 2014: A 12-year-old boy opened fire with a sawed-off shotgun on, also at the school’s gym (this time at the Berrendo Middle School in Roswell, New Mexico), seriously wounding an 11-year-old boy and a 13-year-old girl.

Are school shootings becoming a routine?

What can we do about it?