Understanding Political Lingo: Terms Those on the Right Often Use

This is the first of two blogs discussing political lingo.

As a risk assessment, corporate and executive security agency, for us to do our jobs properly and effectively, it is crucial that we not bring our own personal politics into our work. 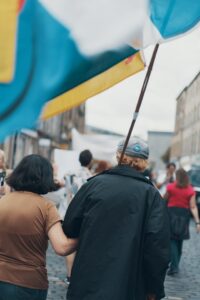 However, as a risk assessment, corporate and executive security agency, we would not be able to do our jobs properly and effectively if we were not up-to-date on the terms and terminology – the political lingo – these groups use, whether they be those organizations on the left, the right, or in the center.

Every organization be it doctors, lawyers, plumbers, or political advocates have their own lingo. It is how they unify their members and how they convey their messages.

With that said, here is some political lingo we often hear today by right wing organizations in the United States:

Alt-right. The alternative right, or alt-right for short, is a segment of white supremacists who reject mainstream conservatism in politics; they embrace racism, anti-Semitism, and white supremacy.

Far right. People who are far right are very conservative and usually work within the parameters of the political system.

Mud peoples. Alt-right followers believe God made “man”—meaning white men—but believe non-whites and Jews are the “beasts of the field” who were made from mud.

Chasing down. This term is most often used against Black people, usually specific Black people the alt-right would like to see removed or neutralized in some way.

LGBT. Instead of referring to lesbian, gay, bisexual, and transgender, in the extremist right-wing world these letters stand for “Let God burn them.”

*They.* This invariably refers to Jewish people. “Our people can and will achieve the goals we desire—no matter how hard *they* try to stop it.”

“Chimps” and “sh*skins.” These slurs refer to Black Americans.

Doxing. The publishing of private or identifying information about a person online, usually to provoke harm to that person.

“Drain on society.” Hitler referred to people that are ill, deformed, or mentally challenged as a drain on society. This term is sometimes used now by right-wing groups to refer to people they believe should be killed. For example, when Heather Heyer was killed in the demonstrations in Charlottesville, she was called a “drain on society.”

100%. This term is often used in right-wing writing, propaganda, or speaking to indicate a person is 100 percent white.

“Keep Families Together.” This is right-wing lingo for deporting families along with all who support for them.

White civil rights advocate. Someone fighting for white people’s rights. This coded language is political lingo designed to sound neutral; however, once uncovered, it usually references hate and hate speech.

Act of war. When a social media organization censors or removes comments or an entire group from their platforms, right-wing groups view this as an act of water.

Snowflakes or normies. People that are easily offended by right-wing jargon are known as snowflakes; normies is political lingo for people that lean left.

Click here for our White Papers and Case Studies