Terrorists have proven that they are highly adaptable, particularly as they search for new potential targets. “Red Teaming”, today’s main method for detecting vulnerabilities, is a fine technique, but it is not up to the challenges in the fight against threats to the aviation sector.

TDMTM and the on-going Challenge of Aviation Security

Recent terror incidents in Brussels, Istanbul and the loss of Metrojet 9286 in Egypt, have demonstrated that terrorists have the capacity to adapt to compromise layers of security countermeasures. Unfortunately, in our zeal to protect ourselves from the next attack, the current emphasis on technological countermeasures focuses on yesterday’s threat and usually does not give enough attention to “the human element” which evolves rapidly, creating ever-changing threat profiles.

“Red teaming” is not new by any means. Law enforcement agencies and infrastructure operators challenge the integrity and functionality of access control systems, security personnel and technologies used to detect a variety of threats.The purpose of a red team is  to analyze the capabilities and expose vulnerabilities of people and/or systems by challenging their operation in real-time and real-life, while employing multiple attack vectors (e.g. people & technology). 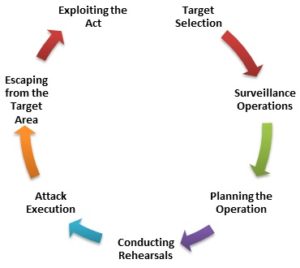 We know that a terrorist’s target attack cycle looks something like this:

As part of its implementation, TDMTM employs specialized ‘cells’, each designed to emulate a
terrorist’s specific behavior, act or philosophy. For example, there is a “Shura Council”, which imitates the terrorists’ command organization, and is responsible for several actions, such as determining attack objectives and selecting targets.

TDMTM Target Analysis Cell will devote itself to the following tasks:

Other Cells will perform additional tasks designed to bring the analytic power of TDM TM as close as
possible to the target goal of emulating the thinking and actions of the “bad guys”, thus being able to effectively address the vulnerabilities that may attract them to a specific target. Together, these and other TDM TM Cells collect, analyze and refine the knowledge necessary to provide greater insight into the ways terrorists may look at vulnerabilities that could attract them to a specific target over another.

Benefits of the TDM TM Approach:

Essentially, TDM TM provides better understanding of our adversaries and is a radical departure from security strategies that place all of our attackers into the single, one-size-fits-all, undifferentiated category of “terrorists”. For example, when it comes to aviation, TDM TM‘s focus extends far beyond the physical area of the airport. This does so by taking into account all activities and facilities associated with the life cycle of passenger and cargo movement: transportation to and from the airport and associated facilities (e.g., tourist attractions, hotels, stadiums, convention centers) is part of one continuous chain of related elements, and therefore requires a holistic assessment of protection efforts from an intelligence, operations and logistics perspective – all taken from the adversary’s view point.

This new perspective on critical infrastructure security means that key personnel must be familiar with the broader aspects of risk assessment methods, associated security technology, intelligence analysis, vulnerability and threat assessment procedures, emergency response and emergency recovery. These elements all come into play within a multi-layered, interagency environment, supported by a complex command, control and communications (C3I) infrastructure. Meeting these demanding requirements requires the realization that early preparation and strenuous training are vital.